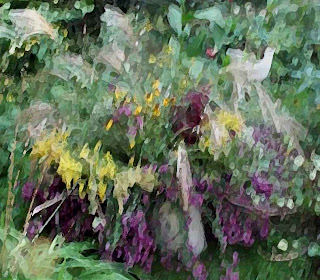 October 15th is Blog Action Day. Thousands of bloggers are writing about one subject: the environment.

Crikey! A deadline, and as usual I haven't a clue what I'm going to say; worse than that I fear I won't say anything useful. Or to say something as banal as, I strongly support the environment by doing things like taking my own bags to the grocery store with me.

It is true that I take my own bags to the grocery store, la di da. But I'm not a vegetarian, even though I know my meat munching has a much bigger impact than the grocery bags saved. The fact of the matter is in too much of my daily life the foot print I make is big and clumsy.

The title of the post comes from the title a song by the great Mose Allison. He sings: "Everyone's cryin' mercy/ when they don't know the meaning of the word." So I look it up in the American Heritage Dictionary:

Kind and compassionate treatment of an offender, enemy prisoner, or other person under one's power; clemency.

Part of what makes talking about the environment so hard is this business of power. When European explores first sailed across the ocean and "discovered" America, they talked about the land in terms of a young woman, a virgin. Some observers liken the language as intending rape. Certainly the idea of mastery over the land is not at all uncommon then as now. The difference is that now we're able to expend some much more work in a much shorter time. We can move mountains.

People are still skeptical about how much power they have over the elements; as much as we have, it seems puny. What's above and what's below are connected, we're sure, although not always sure how. In dire straits communities may hire a rainmaker, in desperate hope, while knowing that's a con. A person doesn't make the rain which comes from heaven above. Maybe the rattles and dancing can help bring the rain, or maybe it's the songs of the frogs who call the rain down? We're conflicted, cryin' mercy from above, and showing little in our own steps.

It's not so much we people deny our impact on the environment, it's just hard to imagine what to do about it.

Al Gore in a letter acknowledging his being awarded the Nobel Peace Prize in conjunction with the Intergovernmental Panel on Climate change wrote (though a comment at Theriomorph):

The climate crisis is not a political issue, it is a moral and spiritual challenge to all of humanity. It is also our greatest opportunity to lift global consciousness to a higher level.

Gore is donating all of the prize money to The Alliance for Climate Protection. It's a good Web site with lots of practical suggestions for steps we can all take. None of the steps seems particularly glamorous, but hey, it's a process. When I take one step, I can take another.

Speaking of stepping, I happen to be convinced that oil and gas supply problems are real. More of us will probably be doing a lot more walking and a lot less driving sooner than any of us imagine. A blog that I really like is Transition Culture: An Evolving Exploration into the Head, Heart, and Hands of Energy Descent. I particularly admire that blogger Rob Hopkins connects the head, heart and hands.

Hopkins is also actively involved with Transition Towns in his town of Totnes. The community initiative is to develop a energy descent plan with the understanding that if properly planned the town could use a lot less energy and resources. Here's the best part, they assume that their town using less can "be more resilient, more abundant and more pleasurable than the present." I was cynical when I first started following the Transition Culture blog. The blog is conversational, and practical. I get the sense they just might become all of those.

I want to explore this transition town idea in my own community. Stepping beyond the little property where I live could be a step in the right direction. Here's an archived copy of 10 First Steps for a Transition Town Initiative at Energy Bulletin Hopkins published earlier in this year at his blog. Already initiatives have sprung up in other towns in Great Britain and abroad.

I'm actively following an initiative in Northern Uganda to resettle about 150 child-headed families in a farm village. Perhaps the best place for an overview of the project is at the community group at Razoo, Opok Farms Village. It's such an interesting project to think about because the property, has good farm land which has laid fallow for twenty years, and forest. The whole community has been so discombobulated, but there's real hope to repair and build. I find the vision of the young people particularly hopeful.

But sitting here in America in my basement office typing away makes me feel a bit of a hypocrite. Dave Pollard is a really smart guy. Recently he linked to a post by Wendell Berry at the Briar Patch Network, Seventeen Rules for a Sustainable Community. Yikes! Sounds like a lot of work. But what I noticed is many of the rules that Berry puts out there are ideas that we've talked about for Opok Farms Village.

There are many issues quite distinct to Totnes, Gulu, and Freedom, Pennsylvania. But there are some ideas that make sense all around. Berry links to an essay contained in his book A Continuous Harmony: Essays Cultural & Agricultural Think Little. Al Gore sees a great opportunity for lifting global consciousness, I'm not so visionary as he is. Berry's Think Little reminds to attend to what we can, to be responsible where we can.

I've been cryin' mercy, all the while thing big, thinking global. I'd expect to be scolded, but Berry's message doesn't feel that way. We all can do something for the environment, with head, heart and hands. Being responsible means being able to respond. I pray I show mercy where I have power, and that might the powers above me have mercy on me.
Posted by John Powers at 12:48 AM

For not knowing what to say I think you did just fine!

This work is licensed under a Creative Commons Attribution 3.0 License.